Growing Artichokes As Annuals In Cold Climates & The Subarctic

Artichokes were one of the things that took us by surprise in subarctic gardening.  We love this delectable thistle like plant!

Not only can we grow them in our northern latitudes, we can grow them well!

This article explores the specific ins and outs to artichoke growing in subarctic latitudes and hopefully will encourage you to give them a try!

Wait, We Can Grow Artichokes?

A member of the thistle family, the artichoke has long been grown as a cultivated type of the cardoon plant.  Artichokes are commonly found as a perennial that grow at much more southern latitudes such as the Mediterranean and lower Americas.

Fortunately, some smart plant people figured out how to breed artichokes that will produce within a single, annual season.  This opened the doors to growing them as annual plants, thus greatly expanding the regions where they could be grown.

Moreover, artichokes have a very specific need that the subarctic provides very well. 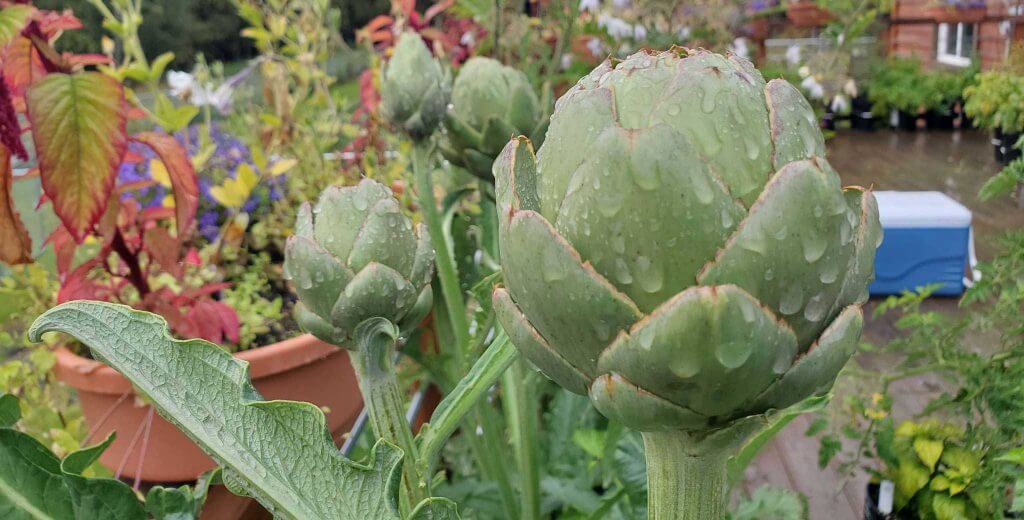 Typically, artichokes need a week or so at temperatures below 50 degrees Fahrenheit to produce their interesting globe.

Additionally, artichokes tend to flower in particularly hot temperatures.  Our subarctic summer temperatures offer the plant ideal conditions for maturing, even over the “heat” of summer.

This means the artichoke is super well suited to our subarctic conditions as we are virtually guaranteed these things will happen!

So, now that we know we can do it, let’s get to the specifics!

You Must Use The Right Artichoke Genetics

As we mentioned above, most artichokes are grown as perennials.  That won’t do for us here in the subarctic.

You need to seek out very specific varieties for the artichoke to do well.  We are aware of two major varieties that offer the northern gardener an opportunity:

Both of these varieties feature the ability to produce within a single year.  Imperial Star is about an 85 day variety whereas Green Globe is roughly 120 days.  We have grown both and both will produce in the subarctic.

There are also variants on the two above varieties.  These can go by names such as Tavor, Colorado Star, Purple Imperial Star and the stunning Violetto.

We have found some varieties that supposedly have the same annual characteristics, but seeds are difficult to find.  Varieties such as Madrigal, Lorca, A-106, Symphony and Harmony are all claimed to be annual varieties.

In general, we recommend avoiding purple colored variants, at least until you have some experience under your belt.  Purple varieties are almost always more challenging to grow than the more typical variants.

Given that artichokes need some time to mature, we’re going to sow them fairly early in the season.

We typically aim to get our artichokes in soil about the beginning of April, or roughly 9 weeks prior to our last frost. Artichokes will get fairly large, fairly fast.  While you can sow them a bit earlier (up to 12 weeks before last frost), you will need a decent grow room space to handle large plants.

Sowing a bit earlier will help ensure you get those nice big globes.  With 9 weeks, we usually get our artichokes harvested “just in time” for first frost.  This has been the best balance that we’ve found in our grow room.

In our grow room, we treat artichokes just like we would most large plants.  So, they get the exact same treatment as peppers, tomatoes and so forth.

When we transplant from our seedling tray, we like to go straight into a 3.5 inch pot for growth to full term.  They will definitely get somewhat large by the time they are ready for transplanting!

Since we only grow a handful of artichokes each year, we’ll often even sow directly into 3.5 inch pots and bypass the transplanting stage entirely.

We have found the artichoke to be a fairly thirsty plant.  If we’re having problems keeping our artichokes hydrated, we often consider transplanting into an even larger, 5.5 inch pot.

This additional transplant step to a larger pot can really benefit the artichoke.  They will take full advantage of the increased soil, getting larger and producing earlier than they would otherwise.

In fact, we’ve seen this second transplant to be so beneficial to our artichokes that we’ve integrated into our standard practices for them.

As we mentioned above, artichokes have a unique “need” to have several days below 50 degrees Fahrenheit to produce.

We have found that our subarctic spring is a perfect time to provide this for our artichokes!

When we have days that are in the 40’s, this is a perfect time to have your artichokes outside!  We always like to harden off our artichokes in early to mid April, leaving them mostly outside, as temperatures allow.

Of course, if unseasonable frosts or temperatures into the 30’s are expected, we do recommend bringing your artichokes inside or place them in a greenhouse.

Grow Artichokes In Containers, If Possible

While artichokes are not all that picky about warm soils, they will definitely benefit from having warmer soils.

We have found that the subarctic ground is often too variable for artichokes to produce well.  Some years it will work, but other years, not so much.

We have had our most consistent results growing subarctic artichokes in containers.  Here at Frosty Garden, we use black 5 gallon buckets that have been rigged for sub irrigated watering.  Any container will be better than the ground, though!

Artichokes will need about 24 inch spacing between plants.  They get fairly large under the midnight sun, so room to spread out is good!  That said, we grow them with 18 inch spacing and find they produce just as well.

Grow Artichokes Outside, Under The Midnight Sun

While there might be benefits to growing artichokes in a greenhouse, our preferred approach is to grow them entirely outdoors!

We find them to be extremely tolerant of our relatively cool growing season.  They even handle considerably cool nights (into the 40’s) very well.

For most of the warmer zones that grow artichokes, they often grow them over the winter.  While this isn’t an option for us subarctic gardeners, it exemplifies they are accustomed to growing in relatively cool temperatures.

The artichoke will grow the fastest during July and August, typically producing its globes over the month of August.

If you do decide to grow your artichokes in a greenhouse, be sure to observe the plant’s temperature needs.  (They need a week+ below 50 degrees.)  Once the plant gets that, they should be safe to put in your greenhouse.

Artichokes are definitely a thirsty plant.

You want to make sure you stay on top of watering your artichokes.  Make sure you water quite deeply, fully saturating the plant’s roots.  It’s good to be consistent with your watering, which is one of the reasons we like to grow them in sub irrigated containers.

As for food, artichokes are also a fairly hungry plant as well.  They will take well to fertilized soil, which will help with an expedited harvest.  This is especially important in the subarctic where we are trying to maximize growth within a short season.

We generally like to go with an all purpose variety of fertilizer.  We often use a flowering focused fertilizer over the summer and we don’t see any negative effects.  For that reason, we don’t really think artichokes are all that picky – just give them NPK and it’ll be fine.

You Never Have To Worry About Flowering

Artichokes, if left unharvested in high heat, will eventually flower.  They are a very vibrant, superbly interesting and prolific flowering plant. 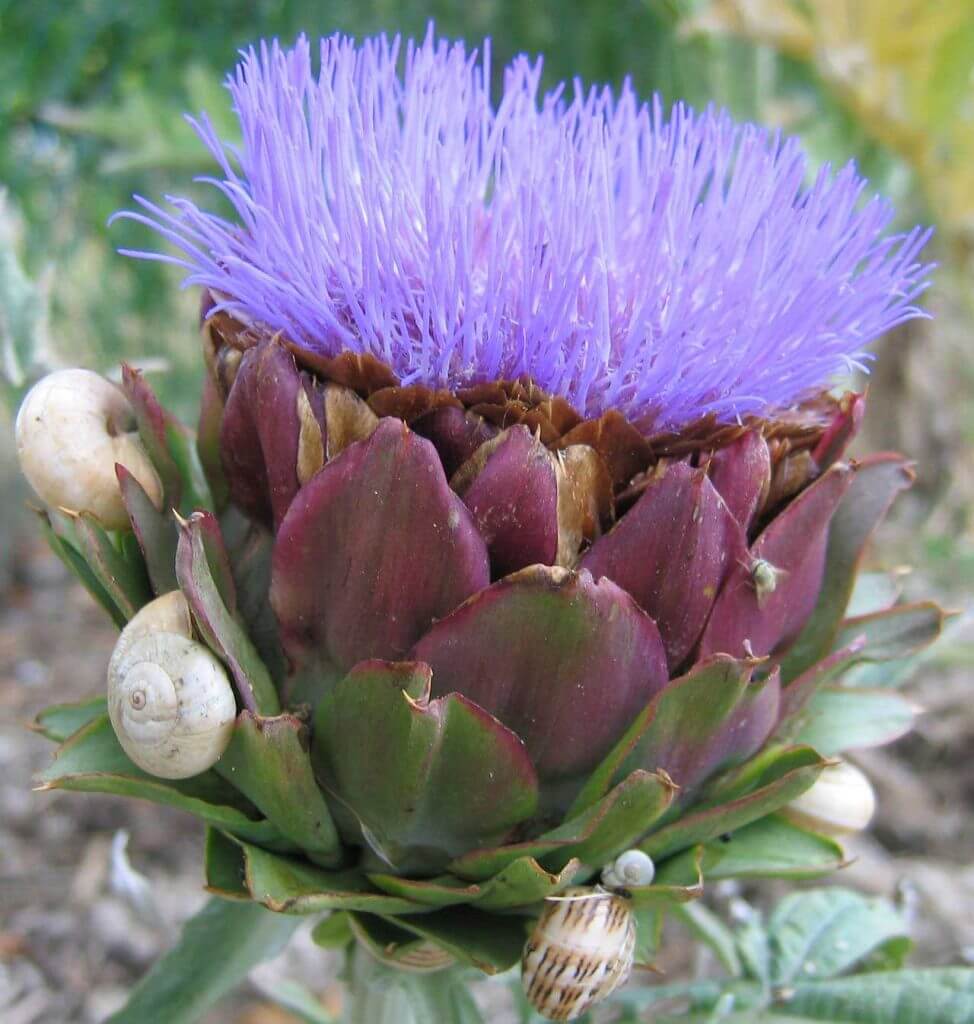 Fortunately, at subarctic latitudes, this is rarely going to be a problem.

At least in the interior of Alaska, we never get warm enough to encourage the artichoke to flower.

Remember, in most latitudes, artichokes are grown over the winter and harvested just before the heat of summer really kicks in.  Our season is particularly well suited to growing artichokes as an annual plant, even over the summer!

One of the realities of growing artichokes in the subarctic is that you aren’t going to get “bountiful” harvest from each plant.

In our experience, it’s common to get one or two full size artichokes from each plant, along with another one or two considerably smaller globes. 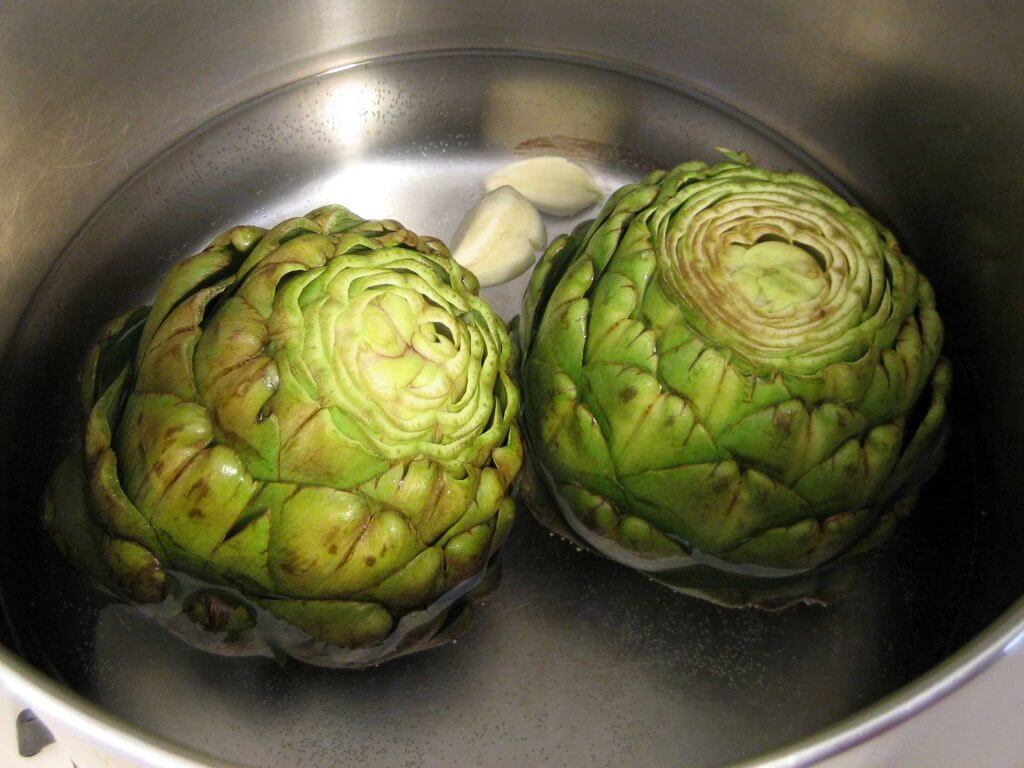 If you are planning for a particular harvest, we’d suggest using about two artichokes per plant as the expected harvest rate.  Thus, if you want 20 artichokes, you’ll probably need around 10 plants.

We often will eat our larger globes when they become mature.  For the smaller chokes, we often will steam all these up together and have a “mini artichoke” feast!

The lesser known thistle from which the artichoke was born is called the cardoon.

Cardoons are somewhat obscure in the North American garden as well as our diets.  We didn’t know about them for many years!

Cardoons are basically the artichoke plant, but without the artichokes.  They are incredibly prolific growers at subarctic latitudes, providing quite a bit of food without a ton of work. 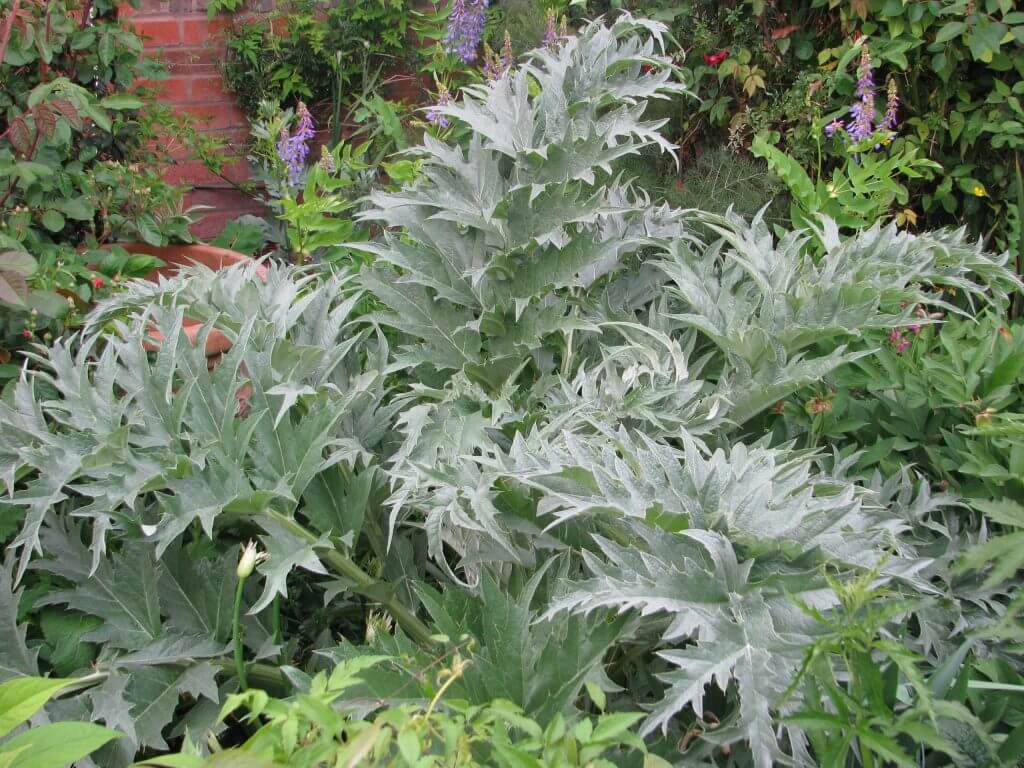 Cardoons will even produce quite well in subarctic soils, making them an ideal candidate for in-ground subarctic gardens.  They provide great artichoke like flavor and can be used in a variety of ways.

Despite the seemingly superior genetics of the cardoon, there are a couple of drawbacks to growing them.

First, due to their obscurity, there are limited recipes out there that use cardoon.  We haven’t explored all the possibilities, but the internet did turn up a few different things to try in the kitchen.

Second, they are a fairly robust plant.  It often takes peeling the cardoon’s stalks and cooking them for fairly extended periods of time to get them to an acceptable texture.  It’s a labor of love, but maybe you have a soft spot in your heart for it?

Go Forth & Make Many Artichokes

Our artichokes are always a favorite of our subarctic gardens.  Our artichoke harvest is always revered and an exciting time for our garden.

If you haven’t ever grown an artichoke, you’re in for a real treat!  They are a very fun and interesting plant to grow.  It is perhaps one of those surprising things we can do up north that can’t be done elsewhere!